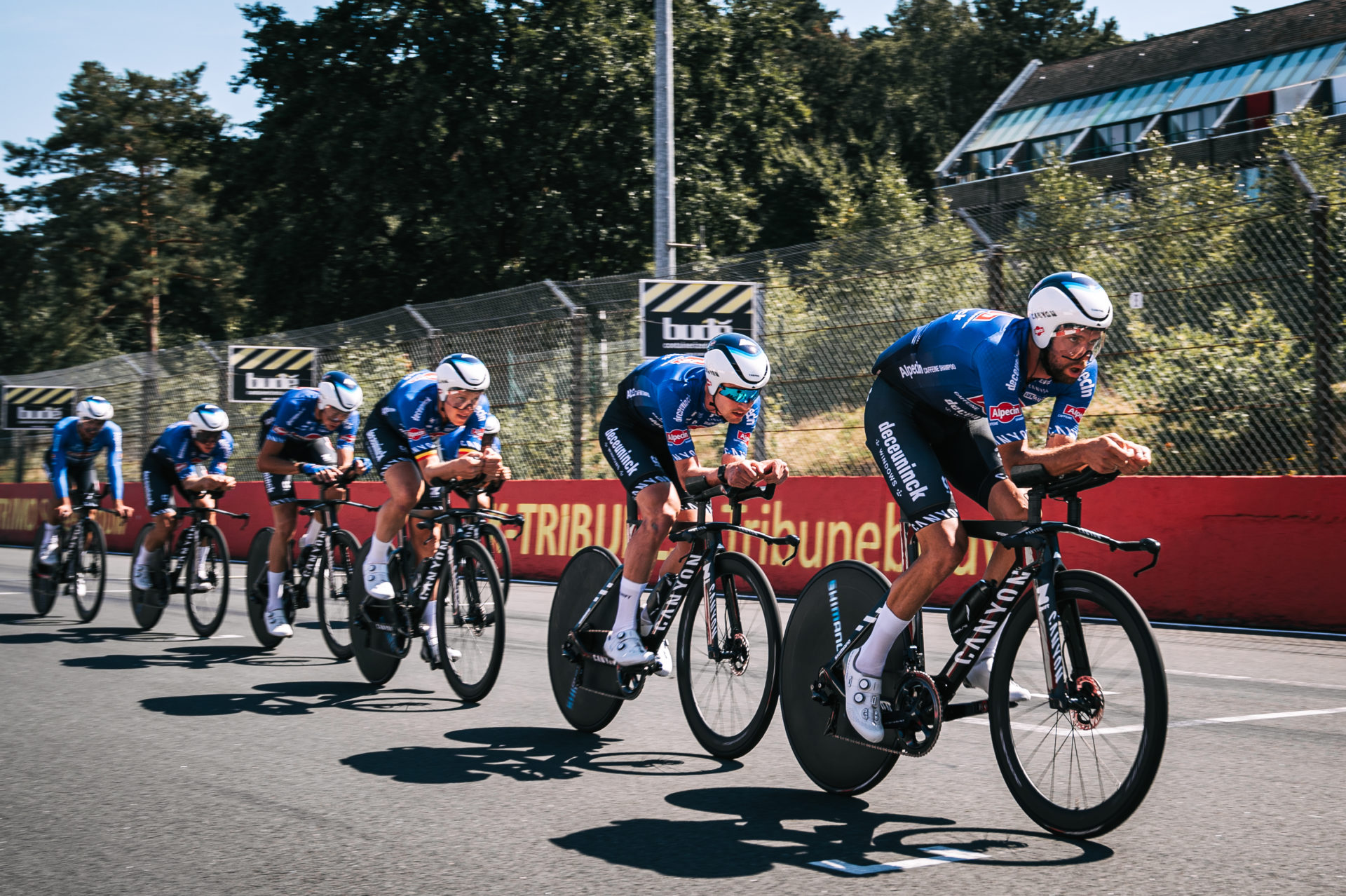 A special discipline at “la Vuelta”: the team time trial

A bad day in an individual time trial for a pro rider, means he loses time. In a team time trial he might lets break off the back wheel of the rider in front. This doesn’t sound very dramatic but in fact it is and causes chaos: because the team loses ist rhythm, the tactics worked out before are obsolete and the dream of a victory or a good result is gone.

Not surprisingly, the tension in such a competition is much higher than in an individual time trial. When the riders compete together in a “contre la montre par equipe”, the stakes are incredibly high; especially when such a team time trial takes place at a Grand Tour.

For many teams, the “Team Time Trial” during a Grand Tour is about putting their captain in a good starting position for the overall classification – ideally to gain an advantage over their direct competitors. This will also be the case on 19 August 2022, when the Vuelta a Espana opens with the team time trial. Although these 23.3 kilometres around Utrecht will not decide the overall victory alone, an advantage of up to 60 seconds over the competitors for the red jersey is quite possible over this distance.

The team time trial is a very complex discipline, because it is not simply to count on the sum of the particles. Therefore, the composition of the formation and the team play are of very special importance. After all, being good in individual time trials does not necessarily make you a good rider in a TTT. “Physiologically, an athlete who competes in a team time trial already has to be more explosive than a classic individual time trial rider,” Silvan Dillier explains in an interview with German website Cyclingmagazine.

The Alpecin-Deceuninck pro became world champion in the team time trial in 2014 and 2015 with his former team BMC. “The reason is that you ride far above the threshold at the front of the formation, which you don’t do in the individual time trial,” Dillier continues.

Individual vs. team time trial – what is different

Physiologically the team time trial is more uneven or heterogeneous – a rollercoaster of performance.  Shortly at the limit of performance, afterwards longer in the “recovery”, whereby up to 300 watts are also pedalled here.  “It’s also important to be able to recover as best as possible on the backwheels of your team mates, to be able to effort far above the threshold again,” Dillier continues.

Speedproof sprinters and classics riders are predestined for such a load, as they also have to perform like this in their road races. Puncheurs have to launch attacks and keep up with them, sprinters with high tempo can ride long sprints in race finals or always get into position with fast attacks. No wonder that riders like top sprinter Marcel Kittel with Etixx – Quick Step or puncheur Michael Matthews with Sunweb were part of teams who won team time trials.

Suffering is part of a team time trial

In addition, these types of riders usually also have a very good sense of speed as well as excellent riding technique and they can almost playfully ride through corners and pick up the pace “smoothly” again. Because team time trials also require courage. It is not everyone’s cup of tea to ride tyre to tyre across the road at 60 km/h without seeing what is happening at the front.

Dillier, like some other riders, benefits from his experience on the track: “Riding directly behind each other with only a few millimetres distance between the back wheel of the rider in front and your own front wheel, that’s what you train for thousands of laps on the track. Of course, that is extremely beneficial. On top of that, you train these short intervals of 10 to 20 seconds on the track,” he explains.

But of course specialists in individual time trials can also be good team members for a closed formation. The decisive factor is that they are able to go along with this change in intensity – Stefan Küng, Tony Martin, Tom Dumoulin or Fabian Cancellara are the best examples.

But how does a harmony in the team emerge from the heterogeneity of the riders? This harmony is achieved through the length of the leads. Stronger riders lead longer, weaker ones shorter – especially in the second half of the race. It is important to avoid speed changes or abrupt acceleration; because that hurts everyone enormously. Especially the man who has just recovered from his lead and is getting in line at the back will be downright killed by a sudden unprepared “wind-up”.

Everyone has to be aware of their strengths and weaknesses as well as those of their team members and know exactly what they are doing.  Thinking for others and taking responsibility for the collective are psychological factors that also matter in a good team time trial. “Most riders feel more pressure in a team time trial than in an individual time trial.

You have more responsibility and you don’t want to be the one who screws up or holds up the team. That’s why many riders are extremely stressed before such a race. On top of that, there is also a bit of uncertainty, because it is not exactly a competition that you compete in every two to four weeks like an individual time trial,” says Dillier.

The last real team time trial with the best riders of each team was already 3 years ago at World Championships in Innsbruck in 2019. Dillier thinks that’s a shame. “Since there are no more world championships in this discipline, there are also fewer and fewer competitions during the season at a Grand Tour or at other stage races. If we were to integrate this race back into the World Championships, then there would be more of these competitions during the season, because the teams also want to test their formation or their riders in this discipline,”.

Because team time trials, as the name implies, require real teamwork. Not only among the riders, but also already in the preparation and testing of mechanics, coaches, sport directors and many other experts in the team. This discipline combines pretty much everything that is required in cycling – and at the end it is the dedication to others in competition. There is no other discipline where the team incorporates its strengths in all areas – training, tactics, technique, equipment – in such a concentrated way as in a team time trial.

Preview Vuelta a Espana 2022: All 21 stages with profiles and maps
Interview Jay Vine: “the numbers where there”
Grand Tour mind games